You are here: Home / News / Apex Stranraer / What Does International Youth Day Have To Do With Stranraer?

International Youth Day is on 12 August and its theme for 2021 is Transforming Food Systems: Youth Innovation for Human and Planetary Health.  This is a wide and varied theme which will spark different interests of young people across the UN countries.  With the world’s every increasing population, it is recognised that simply producing a larger volume of healthier food more sustainably will not ensure human and planetary wellbeing. Other crucial, correlated challenges must also be addressed, such as poverty reduction, social inclusion, health care and climate change mitigation.

Whilst such big topics can be considered impersonally on a global scale, dig a little deeper and you find such issues can hit very close to home, impacting the people you work beside, maybe your neighbour, or the person you sometimes see walking their dog down the street.

Rebecca McKay attended one of our employability services in Apex Stranraer when she was 17.  She understands the need to address some of the underlying issues which affect our food systems because she has directly experienced their effects, as she explains here.

My name is Rebecca Louise McKay and I am 20 years old.  I live in Stranraer, which is a small town in the south west of Scotland.  I live with my mum, sister and three dogs.

In 2018 I completed an employability qualification with Apex Scotland at the Stranraer office.  Part of the qualification was to do some work experience and I did this in the soup kitchen and food bank that’s run by Apex Stranraer.  I enjoyed it so much that I continued volunteering there even after my course had finished.

Working in the soup kitchen and the food bank was an eye opener for me.  Until that point my only experience of this sort of thing was to be on the receiving end – my family had previously needed to get food parcels and, to be honest, I’d never really given the whole system much thought.  I didn’t even know where the food bank was situated; that was something my mum dealt with and that was it.  Since finishing work at Apex I’ve received assistance from the project a couple of times as well.

My first thought about the food bank was that it was really well organised.  Alison, who runs the food bank, was really helpful and explained how everything worked.  Obviously, when I was making up food parcels, I didn’t know who they were for – just how many people they had to feed and whether they had any dietary requirements or not.  But in the soup kitchen I met lots of people and got to know some of them quite well.  Some people were young, some were more mature, but all of them seemed to appreciate what was on offer and liked the social aspect of it too.

I volunteered at the food bank before the coronavirus pandemic and, even then, I couldn’t believe how busy it was.  Not just with food parcels going out though, it was also really busy with contributions.  Some food was brought in by people donating tins and dried food, some came from the supermarket donation boxes and sometimes people even brought in money for us to buy whatever food was needed most. 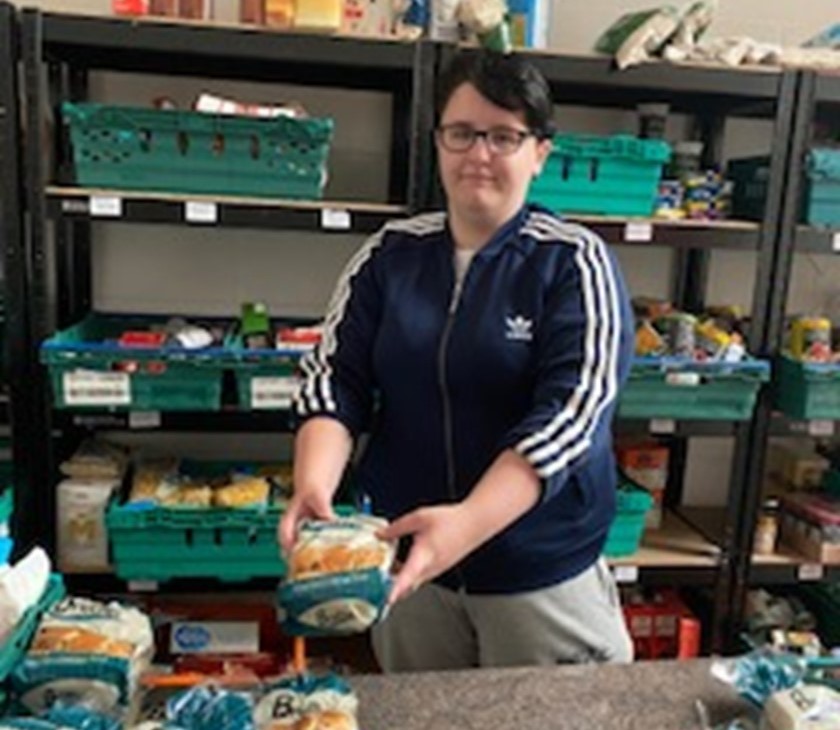 Even though I was really happy to be able to help, even in a small way, it made me sad too.  I realised that other people had problems and it opened my eyes to how many people struggle on a daily basis to feed themselves.  It was especially sad to see how many parcels were made up for people with families to support.  Personally, my priorities are my bills – I always make sure they are paid first and foremost, because I don’t want to get into debt.  What is left is for food.  Sometimes unexpected bills crop up and take me by surprise and that means there’s genuinely nothing left for food.  I know that other people think this way too.  My grannie always told me not to get into debt and prioritise what is important, so I do.  Sometimes this doesn’t leave anything at all if you have to rely on benefits.

I know from personal experience that being on benefits is too often the same as living in poverty.  My hope would be that someday there will be no need for food banks but I think, realistically, that day is a long way off.  For the time being I feel it is such a lifeline for people.  I think that if it wasn’t for places like the food bank at Apex then there would be more people on the streets begging, or maybe having to steal, as well as getting into serious debt with money lenders, or even just not eating.  A lot of people these days have chronic diseases like diabetes and being able to have regular meals is crucial.  If you start missing meals it can cause all sorts of complications both mentally and physically.  There is such a lot of poor mental health these days, I’d say particularly in young people around my own age.  Being in poverty and struggling for food just makes it so much worse.  Knowing you are able to feed yourself a nutritious meal is something a lot of people take for granted yet is something of an achievement for others.

A lot of people who used the soup kitchen had mental health problems as well.  I think that when they got a hot bowl of soup and some company, it made life a bit better for them.

Sadly I think there is still a stigma related to using food banks.  Having to ask for help doesn’t sit right for a lot of people, me included.  It’s not so much accepting the help, it’s being at the point where you need to admit that help is needed in the first place.  Once you get past that point, it’s not so bad.  A lot of people don’t want to ask for help because they are ashamed.  They don’t like the uncomfortable feeling they get when they ask for help.  They also feel that they might be judged which is a shame because you never really know other people’s circumstances and what they might be going through.

I know a lot of people who have worked with the staff at Apex.  When you work with someone there, or do your training there, it’s easier to ask for this sort of help because you already feel secure with the person you’re working with.  It makes having that awkward conversation so much easier!

I think, too, that when you’re younger, you don’t understand how things work.  Your mum might guard you against the harsh truth of how bad things are financially, like mine did, and it’s only as you get a bit older and take control of your own money that you see how hard things can be and you get your eyes opened.

If I hadn’t been involved with Apex personally, I know I would not have made the first move to come up and get any food parcels.  Some of this could be because that’s just me; I have a wee bit of anxiety about new people and places.  There is way more social anxiety in young people now and making that first introductory move can be petrifying for people.  Working with Apex is a way in and makes it so much easier.

I also think that a lot of people don’t know where to look for help and social media is where they will find you.  People need to know what circumstances entitle them to get a food parcel.  Not knowing might put them off applying.  The good thing about Apex is that they have a Facebook page which keeps you updated with what’s happening.  There is also a lot of support available there; it’s more than just a food bank for parcels, because someone’s personal circumstances will get noticed and help will be offered if it’s needed, but not forced on you.

And the best thing is that you can also get a food parcel for your pet!

Our Annual Report for 2021 is now available here. (Please click on the heading) Read about the exciting developments and achievements that have taken place over 2020-21 and gain an insight into what we are doing this year.

Apex Scotland is now recruiting new trustees to help set strategy and enable Apex to achieve its aims and objectives through 2021-22 and beyond.  For information, and to apply, please go to our board recruitment page here. (Please click on the heading)

Apex Scotland is thrilled to become a ‘Partner in Change’ having been awarded Partners in Change  funding from the Robertson Trust which will help us to develop, in partnership with the Resilience Learning Partnership and others, a model for trauma informed working.  We will trial this with the aim of demonstrating the benefits of a…

All the Apex staff I have dealt with have been very helpful, and with all the work we have done...

All the Apex staff I have dealt with have been very helpful, and with all the work we have done I am confident it will help me to find employment in the future.
https://www.apexscotland.org.uk/testimonials/tony-apex-service-user/

Apex has given me the tools, support and confidence in order to get me where I want to be in...

Apex has given me the tools, support and confidence in order to get me where I want to be in life.
https://www.apexscotland.org.uk/testimonials/james-apex-service-user/

All the staff I have worked with at Apex have been brilliant in assisting me, and I owe them a...

All the staff I have worked with at Apex have been brilliant in assisting me, and I owe them a lot for helping me get my life back on track.
https://www.apexscotland.org.uk/testimonials/gary-apex-client/

My confidence in myself and other people has increased. By attending this course I now feel more confident in getting...

My confidence in myself and other people has increased. By attending this course I now feel more confident in getting out of the house, travelling on public transport and doing something for me.
https://www.apexscotland.org.uk/testimonials/apex-service-user/

I have enjoyed each session. Some days I didn’t want to leave the house but the thought of going to...

I have enjoyed each session. Some days I didn’t want to leave the house but the thought of going to the Apex group made me get up and go out.
https://www.apexscotland.org.uk/testimonials/apex-service-user-2/
0
0
Apex Scotland
Back to top